Enoch is in orbit!

I was there to witness the launch, from a distance of 5 miles.  From that far away, we saw the “smoke and fire” a good ten seconds before the sound hit us.  The rocket was a good 45 degrees up in the sky before a low rumbling roar washed over us, growing to a frighteningly loud crackle, culminating in a chest thumping sonic boom as the F9 broke the sound barrier.  The rocket climbed into a clear blue sky, with its kerosene plume like an upside-down candle flame, and the sound gradually dimmed.  We watched the stages separate, silently, and then saw the second stage ignite, like a bright spark floating upward into the sky.

Sometime after that, I lost sight of it.  What I didn’t expect to see was the first stage re-light its engines, descend back into the atmosphere, and land on SpaceX’s drone ship 50 miles away!  But sure enough, there it was – a bright orange spark, floating slowly down over the water, tiny but unmistakable to the naked eye.  After days – really, months – of waiting, we got exceptionally lucky with our viewing conditions.  Watching the Falcon 9 launch and land was an experience that I hope to repeat more than once in a lifetime.

The photo below isn’t mine – it’s one of SpaceX’s official launch photos.  Everyone’s advice is: unless it’s literally your job to photograph the launch, you’ll have a much better experience if you just watch it, and experience.  Everyone was right.  At about T-4, I was still fumbling around with the drive mode on my camera – which would not have captured anything like this image, below, anyhow. 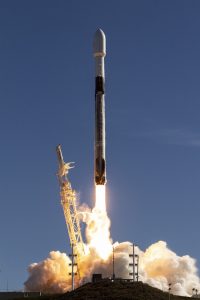 Not long after, we received confirmation that Spaceflight Industries’ SSO-A “Upper Free Flyer” was successfully in orbit, with Enoch stowed safely inside.  This was a fantastic end to a nearly 2-year-long project.  Later, watching the official SpaceX webcast of the launch, I was pleasantly surprised to hear the launch commendations mention Enoch by name.  In fact, Enoch was the only satellite of the 64 on board that SpaceX actually called out this way!

Enoch memorializes a long-forgotten Apollo-era astronaut-candidate who, if he had not been killed in training in 1967, would likely have been the first African American to walk on the Moon. That’s a story worth telling in this day and age.  Here’s a piece on the project from space.com, and LACMA’s official page on the Enoch project.
Southern Stars’ role in all of this was to perform the vibration/thermal-vaccuum and testing need for flight qualification, and to obtain all the various licenses needed from the FCC, NOAA, FAA, NTIA. We also made sure the museum’s deliverable met the launch provider’s stringent and often-changing requirements.
You would think that, for a purely passive art piece in orbit that has no cameras, no radio, no electronics, and no power system, this would be an easy job. You would be wrong. (Imagine what it takes to convince the FCC to issue a radio license for a satellite that has no radio.) There were various points where this project literally looked like it would never get off the ground. Happily all the hurdles were cleared, FAA issued the final payload approval – and Enoch is now in orbit.
To those who might object to this project on the basis that it’s frivolous, that it’s just creating space debris, etc. – let me point out that the entire Apollo program existed primarily to make a political statement, not a scientific one. And – just as with Apollo – there are technical goals attached to Enoch as well. It carries not one but two experimental DARPA-funded satellite-tracking mechanisms.
But let’s be clear – Enoch’s primary mission is artistic. It was a refreshing change of scenery for me. And I’m grateful to have been a part of it!