Orbitrack is your desktop and pocket guide to the thousands of spacecraft orbiting our home planet.

For MacOS, iOS, and Android! 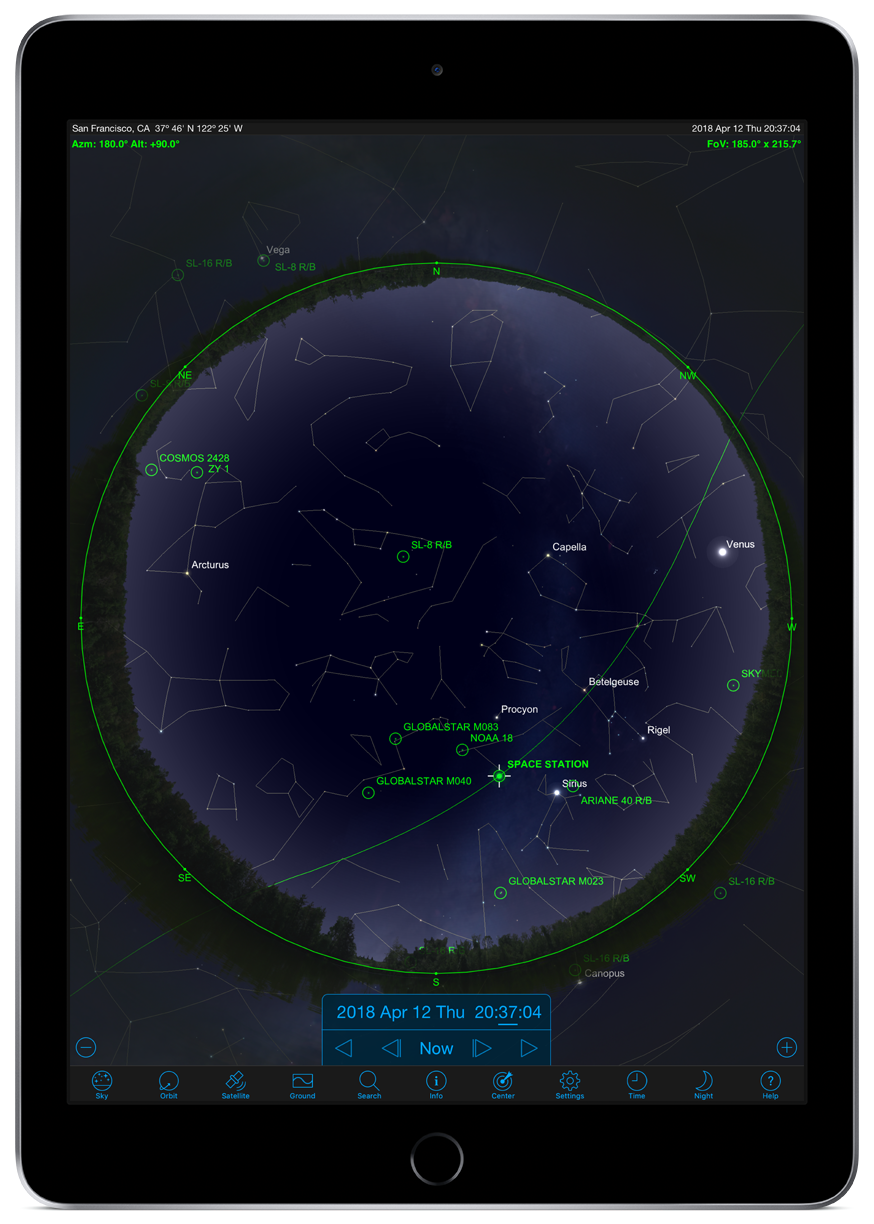 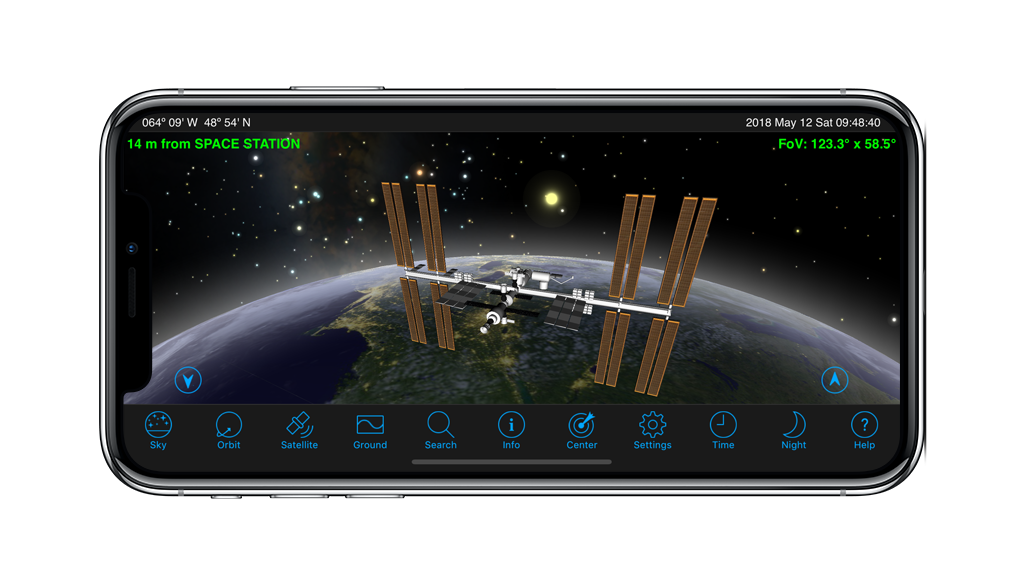 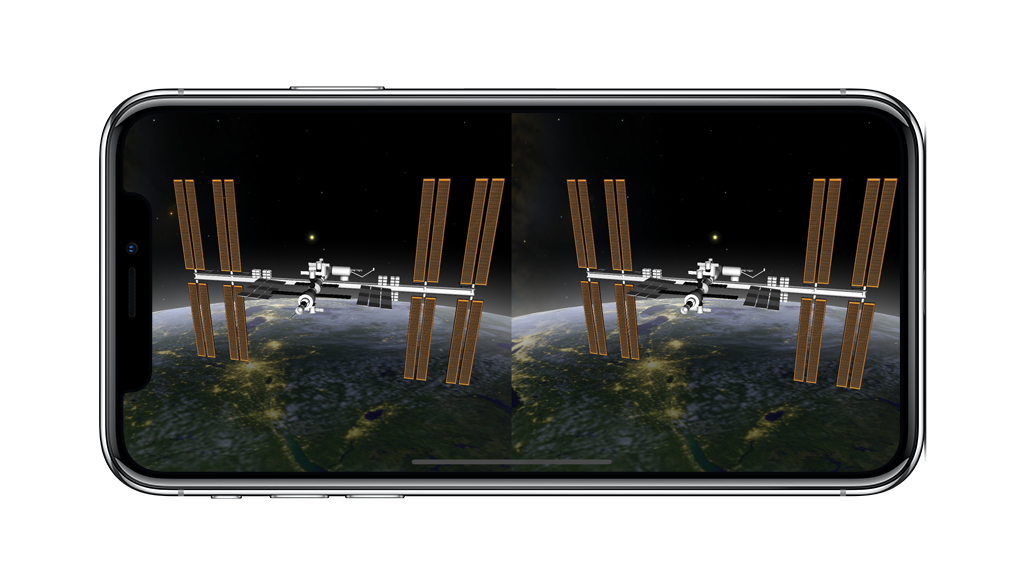 Orbitrack for MacOS, iOS and Android is an advanced satellite tracking app.  It features a database with thousands of spacecraft, plus augmented-reality and virtual-reality modes with voice commands.

Descriptions for hundreds of spacecraft have been updated.  Every satellite now has a description from n2yo.com.

Orbitrack supports the latest Apple hardware and software, including iPhone X/11/12, iPad Pro, and iOS 14.  The Mac version runs on MacOS 10.15 (Catalina) and later, with fully native support for both Intel- and Apple Silicon-based Macs.

And for phones, Orbitrack runs in stereo, with a new voice-controlled Virtual Reality mode compatible with any smartphone VR viewer!

Track thousands of satellites – in orbit and overhead!

Orbitrack will tell you when spacecraft pass overhead, show you where to find them in the sky, and let you track them across the planet.  A new Augmented Reality (AR) Sky view blends video from your phone camera, GPS, and motion sensors to display satellites as they cross your sky!

Get the “Bird’s” eye view

You can show the view from any satellite, and see the Earth from orbit just as the “bird” sees it!  Orbitrack includes detailed 3D models for dozens of satellites – see them up close from any angle!  If you have a smartphone VR viewer, you can see them in stereo.  It’s the most realistic spaceflight experience you can get without leaving the planet!

Stay on top of the space race

Fascinating mission descriptions will teach you about the International Space Station, and hundreds of other satellites in orbit.  Orbitrack updates its satellite data from n2yo.com and celestrak.com every day.  When new spacecraft are launched, maneuver into new orbits, or fall back into the atmosphere, Orbitrack shows you what’s happening up there, right now. 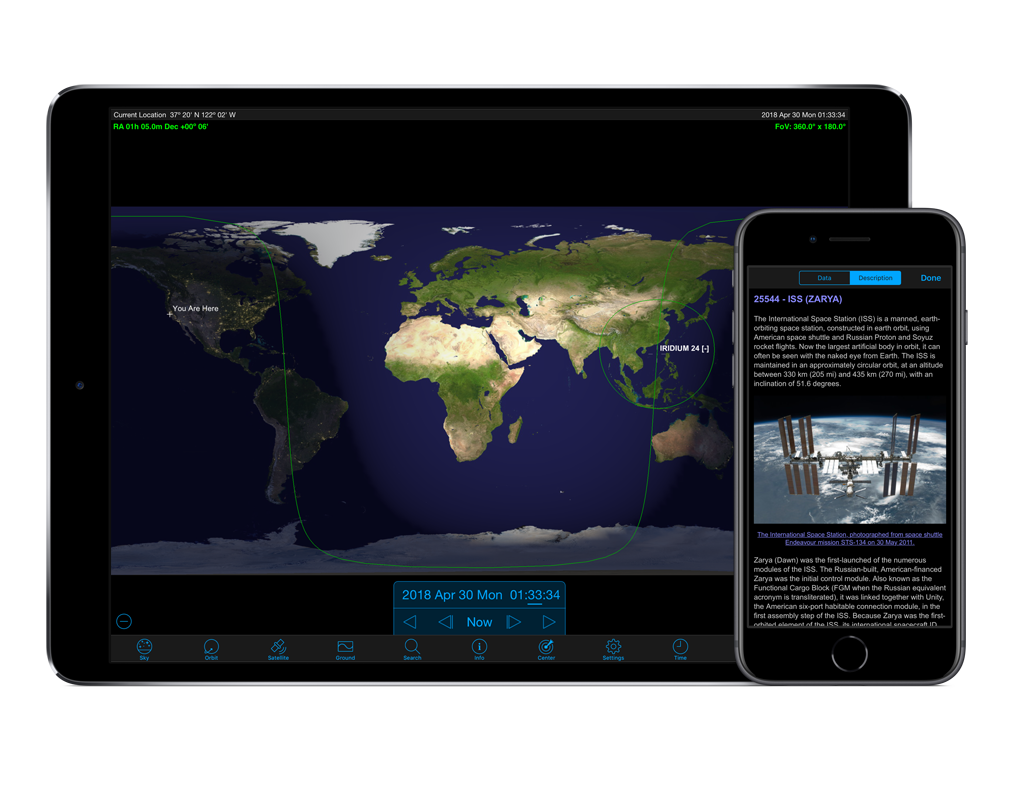 Orbitrack isn’t just powerful – it’s incredibly easy to use!  You don’t need an aerospace degree to become an expert satellite tracker.  Orbitrack puts advanced capabilities at your fingertips, with the same intuitive touch interface you use every day.  And if that’s not enough, it includes detailed, built-in Help – and expert, responsive technical support.

Here are some screen shots of Orbitrack on an iPad. You can click on any image below for a full-size, high-resolution version.

Please feel free to contact us if you have further questions. We hope you enjoy using Orbitrack!

Critical Acclaim and User Praise for Orbitrack and Satellite Safari

"Satellite-focused mobile apps are the best tools for tracking the myriad satellites that are visible with unaided eyes ... One of them, a new app called Orbitrack, now offers an immersive virtual-reality view of the sky and voice commands to assist in your hunt!"

"I've been playing with a new app called Orbitrack, which lets you see what satellites are visible to you in the sky, their orbits, and much more. It's pretty cool! From the same folks who made SkySafari, my fave planetarium app."

"Southern Stars released what is likely the best iOS satellite tracker available – Orbitrack, a successor to their Satellite Safari. It tracks thousands of orbiting satellites, including military satellites, and has detailed 3D models, facts, mission descriptions, and when satellites will be visible for one’s location. Southern Stars has been innovating astronomy software for many many years. I found it intriguing that one can see the perspective from the satellite’s view, complete with a 3D model, beyond seeing all of them orbiting together."

"I regard [Satellite Safari] as authoritative ... Amateur astronomers, wanting to get a photo of the ISS, could use it to plan the pass. Government and military people could use it for all kinds of planning operations. And teachers, students and even casual users just wanting to learn more about particular satellites could learn a lot ... It would be hard to ask for anything more."

"My tests of the app were positive. No crashes, no surprises... Satellite Safari not only does good math, but displays its graphics in a compelling way... A very cool app, which will only become more useful this fall when the SkyCube features ramp up."

"At 7:00 last night, I used Satellite Safari to 'play a movie' of the satellites that would be visible during the upcoming couple hours. It showed a favorably placed crossing of two naked-eye satellites. Here is an animated GIF of six 5-second exposures of intersecting pieces of space junk.The brighter one is an Atlas Centaur 2 launch vehicle that went into orbit in 1963. The fainter object is a Soviet Soyuz rocket body that launched one of their many Cosmos satellites in 1970. Close approach was over 40 miles, so no spectacular impact this time. It would have taken significant effort to predict this event without the using Satellite Safari. The app continues to amaze me."

"Well, they did it again. There are a lot of great and helpful astro apps out there but what keeps coming from Southern Stars are apps of another dimension. This app has in-depth research; it is amazingly user friendly; it raises the developer's high bar even higher; and it is awesomely gorgeous on the iPad. How many more high level apps can these amazing people make for us? They just keep surprising and delighting us."